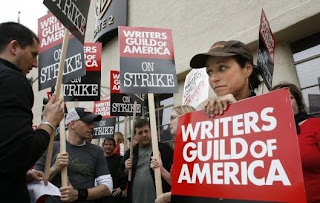 So since I can't sleep I decided to read a few other PCG blogs. A popular topic right now is the whole WGA Strike. It seems that those in PCG World are pretty evenly divided. Half are devastated and terrified of the results of the strike while the other half doesn't give a damn. I happily fall into the later category.

Now I don't really know why the writers are on strike and truthfully don't really care. I am sure it has to do with money but I don't know much more than that. I just know that I don't care. I write every damn day for free because it allows me to escape from the BS of my real job. Maybe the writers should try a real job for a day and see if this strike of theirs is worth it. (Yes I am bitter party of 1.)

The "negative nancy" in me thinks that they should be paying me a refund of all of the shitty episodes of TV that they have written lately. I mean honestly...name one really great show currently on the air that you couldn't live without? I bet you can't. But I digress... So thinking about all of the lousy shows that are currently on TV has made me think of shows that are no longer on and that I miss. So let's take a walk down memory lane shall we????

Perfect Strangers (1986-1993): Okay so this is a no brainer. Everyone loved this show, even if they won't admit it. I am sure that somewhere in my dad's collection of Embarrassing Millie Moments is footage of me doing the Myposian Dance of Joy. As annoying as he was...Balki was also endearing. Sure the show sold out in the end but it had five or six great seasons. I am still pissed that I cannot download the theme song on iTunes or as a ringer on my phone. 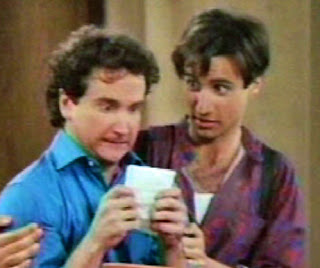 Legends of the Hidden Temple (1993 - 1995): So how could any kid not watch a show hosted by a guy named Kirk Fogg? The show was somewhat educational (at least it probably was to the kids who watched it for any reason other than The Temple Run). I always swore that I was going to go on the show and be an Orange Iguana. (I never made it though...which was probably a good thing because I was afraid of Olmec and the damn spider room.) I still can't figure out why in the hell no one could ever figure out that damn Silver Monkey. It was what...like six pieces? Whatever...I wasn't there. Nevertheless...great show! 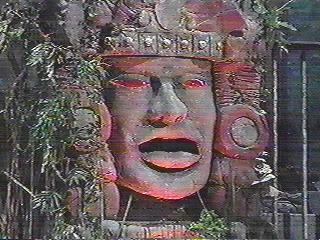 American Gladiators (1989 - 1996): I absolutely LOVED this show!!! I remember getting up early during the summer to watch re-runs on the USA challenge before going to gym practice. Sure it was nice to watch for the hot guys, but it was also cool because I honestly believed that I could have done most of the events. I think that I even left long-time crush Jon Bon Jovi for a brief moment to crush on Turbo. Internet gossip tells me that the show will be back on in 2008. I doubt that it will be as cool as the original (what ever is?) but that might be because I am not a little kid anymore. Nevertheless...I will watch it at least once as a tribute to my childhood ambitions to be an American Gladiator. 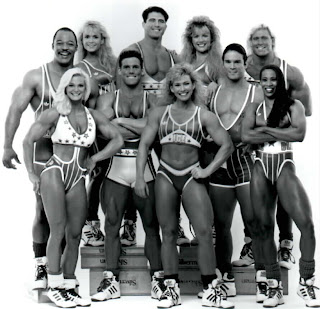 Daria (1997 - 2002): Who doesn't love a cartoon about a sarcastic outcast that was spin off of Beavis and Butt Head? I was never a fan of Jane Lane and absolutely hated Tom Sloane, but I loved just about every other character on the show. Jake was the type of dad that I always wanted though I am not entirely sure why. I think that part of the reason that I loved the show (still do if you want to get technical about it.) is because I wish that I was more like Daria. I have lived my whole life being a "Quinn" and sometimes even a "Brittney" (not as in Spears) and it kind of sucks. Sure the being liked part was cool but sometimes I just want to call it like I see it instead of always trying to say something nice. My sarcasm level has managed to reach amazing levels...but only on occasion. I would pay just about anything for my very own "OK to Cry Corral" shirt. Nowadays when I watch the show I reflect on my high school days. It is then that I think of all of the "Kevies" that I knew and wonder where they are now. If what RK and TL tell me is true, they are taking tickets at movie theaters and carrying flat screens out to cars in front of Best Buy. 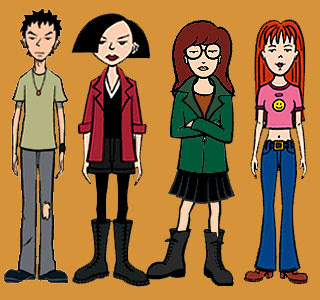 So in closing...strike on WGA. None of the crap that you are putting out these days is worth missing anyway....I think I will jump on Facebook now because I am still not tired but there is nothing on TV.

Labels: On the wings of my dreams