Should Have Been One Missed Movie 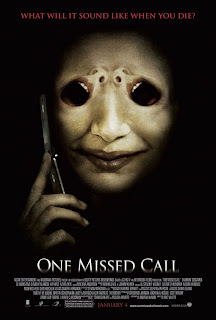 OK so I am little late in reviewing this movie...but if I can prevent one person from watching it...then I have done my job. This movie totally suuuuucked!!! It was not worth the money spent to rent it nor the time I wasted watching it.
So you have Shannyn Sossaman in the female lead role...and she cannot carry a movie on her own. So throw in Edward Burns and a few no-names and guess what...the film still comes up short. The only thing enjoyable about the movie is Burns and I spent most of the movie cursing him for signing on for this role.
The plot of the movie had potential. Think of how much it would suck to get a voicemail from the future and you could hear your own death. The movie is based off a Japanese film so I had high hopes. Maybe that is why I am pissed that it let me down.
The problem was that the voicemails weren't scary. The death scenes weren't scary. Not even the "scary" distorted figures that randomly popped up were scary. I never jumped once through the 87 minute long movie. (Which seemed much longer than that while I was watching it.)
When the person behind the "curse" is revealed...it wasn't shocking....it was kind of like "huh?" Much like the rest of the movie...it didn't make sense.
To make it worse....the movie didn't end when it should. They had to waste another ten minutes of the viewer's time to try to fit in one last scare...and it failed miserably. In fact, they just pissed me off more because not only did they waste my time...but they killed off the only decent character in the movie...and they did it in the lamest way possible.
I mainly watched it because there isn't much else to do when one can't sleep and of course my theory that you can't feel down if you are scared. This movie did not scare me in the slightest...and that pissed me off.
Posted by Millie at 11:25 PM

You can tell by your writing that you are tired. This post sucked almost as much as the movie that you wrote about.