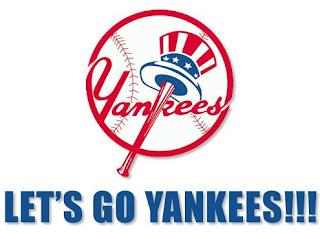 So in spite of the fact that the Yankees are "Wang-less" at the moment...they are on one hell of winning streak. At the risk of jinxing them...I have to say that it is a great thing to see my Yankees playing like they should...playing like Yankees.
Let's start with A-Rod: 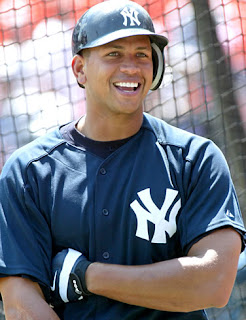 Perhaps I can only admit this because of my newly formed truce with the guy...but I can't help but be impressed with the way that he is playing at the moment. Is he earning his insane paycheck....ask me that in October. But for the moment I can't say a bad thing about him and that is a strange feeling. Think about...the guy has hit a home run in for straight games. I don't care who you are...one has to appreciate who awesome that is. But I am a girl who favors consistency...and A-Rod is hitting over .328. I even wore a pro A-Rod t-shirt yesterday. We've come so far...but still have so far to go.
Let's talk about Johnny: 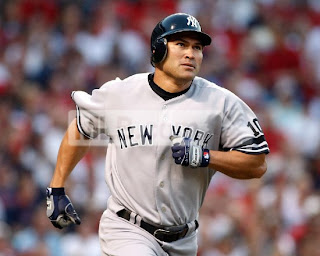 I am becoming quite a fan of Johnny....which is also a strange feeling for me considering that I hated almost as much as Manny. The power of the pinstripes is truly remarkable. While Johnny is no Derek...there is something about the guy. But from a baseball prospective he is rocking my world. He is hitting .327 which is pretty damn awesome. He has the second most at bats for the team and he has 31 RBIs. Johnny has found his place in the Yankee Universe and I couldn't be happier. I still haven't made my peace with the below picture but I am a Damon fan nonetheless. 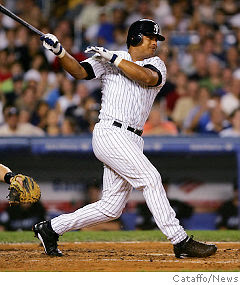 I have never really cared about Bobby Abreu one way or another....but his playing has caught my attention this season. He has the most RBIs on the team. I don't ever expect him to be a favorite of mine, I must say that I am liking what he is adding to the team.
Jason...oh Jason: 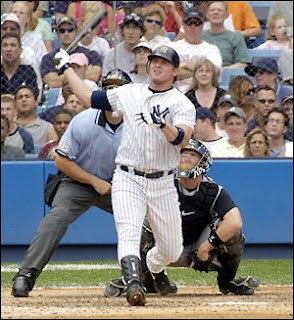 I don't know if it is because of the gold thong or what but Jason Giambi is finally starting to play like the Jason Giambi of the old...and I love it. He is the home run leader for the Yankees which more than makes up for the fact that he had a rough start at the beginning. So Jason...keep wearing that thong or whatever else it takes to keep hitting them over the wall.
Let's talk about the pitchers: 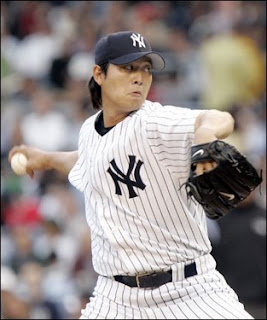 So all jokes aside...it totally SUCKS that Wang is out for the next six weeks. He is the strongest pitchers that the Yankees have and he is going to be hard to replace, even for a short period of time. I heard someone say that the only thing that matters is that he is healthy for the playoffs. Well, the Yankees getting to the playoffs is largely dependant on Wang's right arm so I am a little worried. The rest of the Yankee bullpen needs to get their shit together. I am confident that Mike and Andy will step up and play like the Yankees that they are...but I am not so sure about Joba yet. But much like the rest of the Yankee Universe...I put the majority of my faith in Marino Rivera. I love that guy and think that he will make sure that the Yankees are alright. 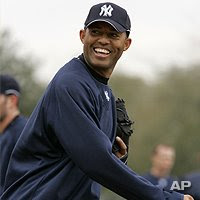 Saving the best for last... 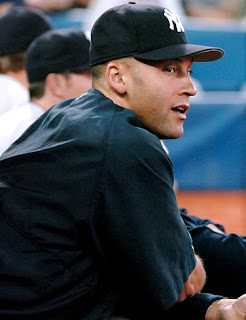 Have I mentioned that I am fan of Derek Jeter? It is hard to talk about Derek's numbers because the numbers don't capture what Derek is to the Yankees. That being said...Derek is hitting .272 and has 32 RBIs which is no small feat. Thanks to my ridiculously expensive subscription to MLB extra innings I get to see the Yankees more than most people. (It is worth the price...but just barely.) My point is that I get to see the way that Derek interacts with this teammates and the other players in the league and realize that there is no way to accurately describe the greatness that is Derek Jeter. He is everything that is right and good about the sport, possibly about mankind in general. The fact that is probably the best looking man on the planet has nothing to do with the fact that he is one of the greatest men to have played the game of baseball. Watch a game and tell me that you don't agree...I dare you. 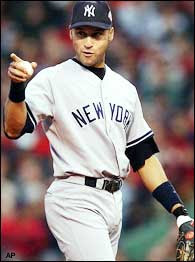 How do you know that Derek is the hottest guy on the planet? You haven't seen every guy yet. There could be some really hot primative guy somewhere that blows Derek out of the water.

Maybe if Bobby was hot you would be bigger fan.

The Todd makes a good point. I for one am much better looking than Derek Jeter.

Fine, I'll bet that the fact that you are a psychotic stalker tends to overshadow your steroid enhanced physical features. Lose the link to this blog before you really piss me off.

Todd my friend...you are probably right about the Bobby Abreu thing but wrong about the Jeter thing. But more importantly...thank you for being my Sam.