Another Waste of My Time 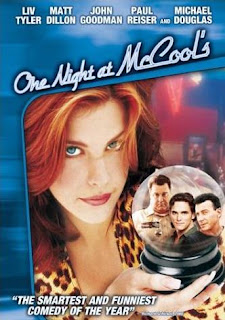 Being the movie buff that I am I tend to react pretty strongly the movies that I watch. If I love movie, I will always love it and will never watch it enough. Examples of these types of the movies are Dirty Dancing, Braveheart, The Lord of the Rings Trilogy, Steel Magnolias, Go, and The American Pie series. The other side of that is that when I hate a movie, I will always hate it and I am usually bitter about having wasted 90 minutes watching the flick. Examples of these movies are The Grudge 2, You've Got Mail, 300, Batman and Robin, and now the subject of tonight's blog...One Night At McCool's.

I think what pisses me off the most about this movie is that it had serious potential to be good based off the star power alone. The movie contains sure things Matt Dillon, Liv Tyler, Michael Douglas, and John Goodman. Throw in Paul Riser who is almost always good for a few laughs and random cameos by Reba McIntyre and Andrew Dice Clay and one should be set for a great film.

I should have known from the hideous white guy fro that Michael Douglas was sporting in the opening scene (which takes place in a Bingo lounge) that the movie was going to be shit. Nevertheless I stuck with it.

So basically you have Liv Tyler as the innocently seeming and yet purely evil vixen who seduces Matt Dillon's character so that her boyfriend can rob his house. The only problem is that he has practically nothing worth stealing and thus the chaos begins. As Matt finds himself trapped with Liv as a result of a rather unnecessary murder...the storyline expands to include John Goodman's cop character and Paul Riser's neurotic cousin of Matt Dillon's character and all three men find themselves hopelessly in love with her.

All three men recap their version of the situation to their various sources of strength. Paul to his shrink who is played by Reba (who is the only character that doesn't totally suck), John to his priest, and Matt to Michael Douglas who is a hitman. Each man sees things totally differently but none of them see that she is totally playing them all.

In the 90 minutes of bad writing and terrible acting...one cannot help but wonder at the stupidity of men and the ease with which a woman can control said men with nothing more but big eyes and a low cut, too tight dress. I felt a little bad for Matt's character being that he took the wrap for the murder, lost his job, his house, and apparently his mind but even that ran short long before the credits ran.

Oh and did I mention that the writing is terrible? No wonder the actors were so damn awful with a script like that. One can only hear Paul Riser drop the big three so many times before you realize that the writers tried to make up for the holes in the script by trying to shock the viewers with awkwardly placed f-bombs.

Being the movie isn't that great...it hardly seems worth it to go into any more details than I already have. Suffice to say...the movie sucks. Don't watch it.

How can you say that this movie sucks? Did you watch the end? I find it hard to believe that you weren't laughing your ass off at the part when Paul Riser is running down the street in his submissive slave outfit. It is one of the funniest movie endings ever.

You are brave to bash 300 again. The Kiskadian is going to be pissed.

I will admit that one part was funny but the rest of it sucked. The movie was supposed to be a dark comedy and it wasn't until the last five minutes that it actually made me laugh. It is not worth the 90 minutes I spent watching it or the space it took up my TIVO it took to record it.

Totally intentional but that being said...300 really is one of the worst movies ever!

At least you stand by your opinion in spite of the fact that it is completely wrong.